Cathelene “Tina” Robinson, also known as “The People’s Clerk," is a lifelong Georgia native and has been a Metro-Atlanta area resident for over 50 years. She is a proud graduate of Carver High School (now named the New Schools at Carver). She also received an Associates of Science Degree in Accounting from Atlanta Junior College, while recently gaining her Superior Court Certificate from the University of Georgia’s, Carl Vinson Institute of Government.

After serving Fulton County citizens for over 40 years as an employee with Fulton County Government, “Tina” was elected by those same citizens as the Clerk of Superior Court in 2008. By becoming elected as Clerk, Tina was entrusted with a budget of $16 Million Dollars and  a staff of over 200 employees to assist her in carrying out her mandated services and responsibilities of properly processing and  safe keeping ALL of Fulton County’s Civil, Criminal, Real Estate and Board of Equalization records. Since then, she has instilled her motto of, “Doing the Right Thing, the Right Way, Each Time, for Every Customer” into her daily duties and the duties of her staff.

In 2016, Robinson agreed to serve as the Clerk of Magistrate Court. Through a committed partnership with Chief Magistrate, Cassandra Kirk and dedication to the citizens of Fulton County, Robinson has been successful in making the Magistrate Court Clerk's office effective and efficient for court users.

In addition to carrying out those responsibilities, Clerk Robinson has also taken a personal interest in becoming a firm voice in the community; focusing on senior services, adolescent development and crime prevention. She has implemented several inter-office initiatives to help citizens gain knowledge of the services of the Clerk’s office and to support them in gaining assistance from other partners of the criminal justice system when needed. In addition various initiatives, Tina is most proud of the Jr. Deputy Clerk Summer Internship program that services rising tenth through twelfth graders in building scholastic, collegiate and career development skills. The program, initiated in 2009, has successfully aided over 200 area youth.

Most recently, Robinson has jump started a technological resurgence in the Fulton Clerk’s office to offer citizens more efficient and effective service. In collaborating with her Criminal Justice Partners, the Fulton County Court’s introduced Tyler Technologies’ Odyssey Unified Justice Case Management System which placed all of the agencies individual case management systems under one multi-functioning umbrella. She also initiated the ability of her office to accept debit and credit card payments for various services. Continuing her commitment to enhance the offices technological practices, Robinson spearheaded another Tyler Technologies’ partnership, Civil E-Filing, which will allow users the ease of initiating cases and filing documents from the comfort of their homes, offices or businesses alike. In addition, she will soon launch a new user-friendly website housing all of these features and allowing constituents to utilize the site as a virtual office. “Tina”, now serving her third term as Clerk plans to continue her commitment of service to the citizens of Georgia’s largest county and use the platform given to her as Clerk of Courts to help make the individual communities that make up Fulton County safer places to live, work, play and build foundations for the success for our youth, while also celebrating the legacies of the senior citizens; one of our community's most valuable resources.

“The People’s Clerk,” Cathelene “Tina” Robinson, is the proud mother of two girls and the grandmother of two boys. She attends Saint Peter Missionary Baptist Church. 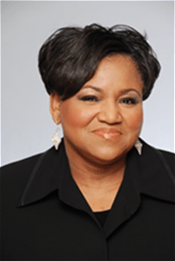